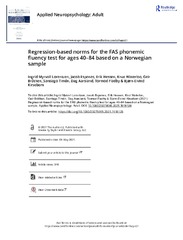 The FAS phonemic fluency test is a commonly used neuropsychological test of executive function and processing speed. Although Norwegian discrete norms have been developed for the FAS test, American regression-based norms are frequently used by clinicians in Norway.

However, language and cultural differences impact performance on the FAS test, and using foreign norms may not be appropriate. Moreover, while discrete norming relies on stratified subgroups of demographics, regression-based norming uses the entire sample to estimate the influence of demographics on performance and may thus improve normative estimates. Here we develop regression-based norms for the FAS phonemic fluency test based on n = 204 healthy Norwegian controls between the ages 40−84 from the Norwegian Dementia Disease Initiation cohort (DDI). We compare the proposed regression norms to published Norwegian discrete norms and American regression-based norms in an independent sample of n = 182 cognitively healthy adults reporting subjective cognitive decline (SCD). We found that years of education was the only significant predictor of FAS performance in our normative sample, accounting for 14.9% of the variance. Both the proposed regression-based norms and previously published discrete norms adequately adjusted for demographics in the independent sample. In contrast, the American norms underestimated the effect of education and overestimated the effect of age. While both the proposed Norwegian regression norms and the previously published discrete norms are suitable for use in Norway, the proposed regression norms may be less vulnerable to sub-stratification sample characteristics posed by discrete norming procedures, and thereby improve normative estimation.