Effects of cognitive-behavioral and psychodynamic-interpersonal treatments for eating disorders: a meta-analytic inquiry into the role of patient characteristics and change in eating disorder-specific and general psychopathology in remission 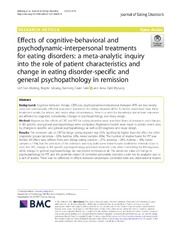 Background - Cognitive behavior therapy (CBT) and psychodynamic-interpersonal therapies (PIT) are two widely used and conceptually different outpatient treatments for eating disorders (EDs). To better understand how these treatments works, for whom, and under what circumstances, there is a need for knowledge about how outcomes are affected by diagnosis, comorbidity, changes in psychopathology, and study design.

Results - The remission rate of CBT for binge eating disorder was 50%, significantly higher than the effect for other diagnostic groups (anorexia = 33%, bulimia: 28%, mixed samples 30%). The number of studies found for PIT was limited. All effect sizes differed from zero (binge eating disorder = 27%, anorexia = 24%, bulimia = 18%, mixed samples = 15%), but the precision of the estimates was low, with some lower-bound confidence intervals close to zero. For CBT, change in ED specific psychopathology predicted remission only when controlling for ED diagnosis, while change in general psychopathology did not predict remission at all. The predictive value of change in psychopathology for PIT, and the potential impact of comorbid personality disorders could not be analyzed due to a lack of studies. There was no difference in effects between randomized controlled trials and observational studies.

Conclusions - CBT showed consistent remission rates for all EDs but left a substantial number of patients not in remission. Extant evidence suggest that PIT is not consistently effective in achieving remission for patients with EDs, although this finding is uncertain due to a small number of eligible studies. A group of patients with eating disorders may, however, require therapy aimed at strengthening deficits in self functions not easily ameliorable by cognitive behavioral techniques alone. Further research should be aimed at identifying treatment interventions that helps patients change behavior, while strengthening self-functions to substitute eating-disordered behavior in the long-term.

Moberg, Solvang, Sæle, Myrvang. Effects of cognitive-behavioral and psychodynamic-interpersonal treatments for eating disorders: a meta-analytic inquiry into the role of patient characteristics and change in eating disorder-specific and general psychopathology in remission. Journal of Eating Disorders. 2021