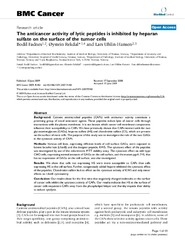 Background: Cationic antimicrobial peptides (CAPs) with antitumor activity constitute a promising group of novel anticancer agents. These peptides induce lysis of cancer cells through interactions with the plasma membrane. It is not known which cancer cell membrane components influence their susceptibility to CAPs. We have previously shown that CAPs interact with the two glycosaminoglycans (GAGs), heparan sulfate (HS) and chondroitin sulfate (CS), which are present on the surface of most cells. The purpose of this study was to investigate the role of the two GAGs in the cytotoxic activity of CAPs.
Methods: Various cell lines, expressing different levels of cell surface GAGs, were exposed to bovine lactoferricin (LfcinB) and the designer peptide, KW5. The cytotoxic effect of the peptides was investigated by use of the colorimetric MTT viability assay. The cytotoxic effect on wild type CHO cells, expressing normal amounts of GAGs on the cell surface, and the mutant pgsA-745, that has no expression of GAGs on the cell surface, was also investigated.
Results: We show that cells not expressing HS were more susceptible to CAPs than cells expressing HS at the cell surface. Further, exogenously added heparin inhibited the cytotoxic effect of the peptides. Chondroitin sulfate had no effect on the cytotoxic activity of KW5 and only minor effects on LfcinB cytotoxicity.
Conclusion: Our results show for the first time that negatively charged molecules at the surface of cancer cells inhibit the cytotoxic activity of CAPs. Our results indicate that HS at the surface of cancer cells sequesters CAPs away from the phospholipid bilayer and thereby impede their ability to induce cytolysis.