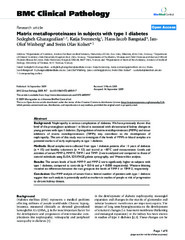 Background: Nephropathy is serious complication of diabetes. We have previously shown that level of the proteoglycan syndecan-1 in blood is associated with ultrastructural kidney changes in young persons with type 1 diabetes. Dysregulation of matrix metalloproteinases (MMPs) and tissue inhibitors of matrix metalloproteinases (TIMPs) may contribute to the development of nephropathy. The aim of this study was to investigate if the levels of MMPs in blood samples are potential markers of early nephropathy in type 1 diabetes.
Methods: Blood samples were collected from type 1 diabetes patients after 11 years of diabetes (n = 15) and healthy volunteers (n = 12) and stored at ÷80°C until measurement. Levels and activities of serum MMP-2, MMP-9, TIMP-1 and TIMP- 2 were analyzed and compared to those of control individuals using ELISA, SDS-PAGE gelatin zymography, and Western blot analysis.
Results: The serum levels of both MMP-9 and MMP-2 were significantly higher in subjects with type 1 diabetes, compared to controls (p = 0.016 and p = 0.008 respectively). Western blotting revealed no differences between the two groups in the levels of TIMP-1 or TIMP-2, respectively.
Conclusion: Our MMP analysis of serum from a limited number of patients with type 1 diabetes suggest that such analysis is potentially useful as markers in studies of people at risk of progression to chronic kidney disease.