Symptoms and signs of colorectal cancer, with differences between proximal and distal colon cancer: a prospective cohort study of diagnostic accuracy in primary care 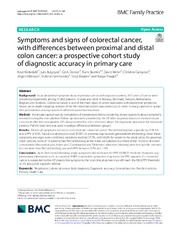 Background - In an abdominal symptom study in primary care in six European countries, 511 cases of cancer were recorded prospectively among 61,802 patients 16 years and older in Norway, Denmark, Sweden, Netherlands, Belgium and Scotland. Colorectal cancer is one of the main types of cancer associated with abdominal symptoms; hence, an in-depth subgroup analysis of the 94 colorectal cancers was carried out in order to study variation in symptom presentation among cancers in different anatomical locations.

Method - Initial data capture was by completion of standardised forms containing closed questions about symptoms recorded during the consultation. Follow-up data were provided by the GP after diagnosis, based on medical record data made after the consultation. GPs also provided free text comments about the diagnostic procedure for individual patients. Fisher’s exact test was used to analyse differences between groups.

Results - Almost all symptoms recorded could indicate colorectal cancer. ‘Rectal bleeding’ had a specificity of 99.4% and a PPV of 4.0%. Faecal occult blood in stool (FOBT) or anaemia may indicate gastrointestinal bleeding: when these symptoms and signs were combined, sensitivity reached 57.5%, with 69.2% for cancer in the distal colon. For proximal colon cancers, none of 18 patients had ‘Rectal bleeding’ at the initial consultation, but three of the 18 did so at a later consultation. ‘Abdominal pain, lower part’, ‘Constipation’ and ‘Distended abdomen, bloating’ were less specific and also less sensitive than ‘Rectal bleeding’, and with PPV between 0.7% and 1.9%.

Conclusions - Apart from rectal bleeding, single symptoms did not reach the PPV 3% NICE threshold. However, supplementary information such as a positive FOBT or persistent symptoms may revise the PPV upwards. If a colorectal cancer is suspected by the GP despite few symptoms, the total clinical picture may still reach the NICE PPV threshold of 3% and justify a specific referral.