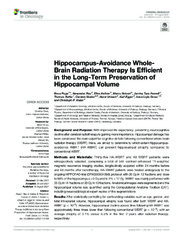 Methods and Materials: Thirty-five HA-WBRT and 48 WBRT patients were retrospectively selected, comprising a total of 544 contrast-enhanced T1-weighted magnetic resonance imaging studies, longitudinally acquired within 24 months before and 48 months after radiotherapy. HA-WBRT patients were treated analogously to the ongoing HIPPORAD-trial (DRKS00004598) protocol with 30 Gy in 12 fractions and dose to 98% of the hippocampus ≤ 9 Gy and to 2% ≤ 17 Gy. WBRT was mainly performed with 35 Gy in 14 fractions or 30 Gy in 10 fractions. Anatomical images were segmented and the hippocampal volume was quantified using the Computational Anatomy Toolbox (CAT), including neuroradiological expert review of the segmentations.

Results: After statistically controlling for confounding variables such as age, gender, and total intracranial volume, hippocampal atrophy was found after both WBRT and HA-WBRT (p < 10−6). However, hippocampal decline across time following HA-WBRT was approximately three times lower than following conventional WBRT (p < 10−6), with an average atrophy of 3.1% versus 8.5% in the first 2 years after radiation therapy, respectively.

Conclusion: HA-WBRT is a therapeutic option for patients with multiple brain metastases, which can effectively and durably minimize hippocampal atrophy compared to conventional WBRT.