Fetal Superior Vena Cava Blood Flow and Its Fraction of Cardiac Output: A Longitudinal Ultrasound Study in the Second Half of Pregnancy 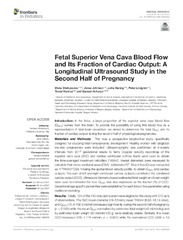 Introduction: In the fetus, a large proportion of the superior vena cava blood flow (QSVC) comes from the brain. To provide the possibility of using this blood flow as a representation of fetal brain circulation, we aimed to determine the fetal QSVC and its fraction of cardiac output during the second half of physiological pregnancies.

Conclusion: We provide reference values for fetal QSVC which increases significantly with gestation, and constitutes roughly 10% of the fetal CCO at any time during the second half of pregnancy.