Exposure to Bioaerosols during Fish Processing on Board Norwegian Fishing Trawlers 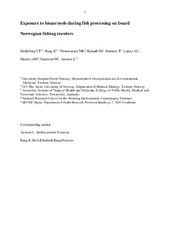 Objectives - The main objective was to gain more knowledge on exposure to bioaerosols in the processing area on board fishing trawlers.

Methods - Exposure sampling was carried out during the work shifts when processing fish in the processing area on board five deep-sea fishing trawlers (trawlers 1–5). Exposure samples were collected from 64 fishermen breathing zone and from stationary sampling stations on board five deep-sea fishing trawlers (1–5). Trawlers 2, 3, and 4 were old ships, not originally built for on board processing of the catch. Trawlers 1 and 5 were relatively new and built to accommodate processing machineries. On trawlers 1–4 round fish was produced; the head and entrails were removed before the fishes were frozen in blocks. Trawler 5 had the most extensive processing, producing fish fillets. Samples were analysed for total protein, trypsin activity, parvalbumin, and endotoxin. One side analysis of variance and Kruskal–Wallis H test were used to compare levels of exposure on the different trawlers.

Results - Personal exposure to total protein were higher on the three oldest trawlers (2, 3, and 4) compared with the two new trawlers (1 and 5). Highest activity of trypsin was detected on the four trawlers producing round fish (1–4). Parvalbumin was detected in 58% of samples from the fillet-trawler (5) compared with 13% of samples from the four trawlers producing round fish. The highest level of endotoxin was detected when using high-pressure water during cleaning machines and floors in the processing area.

Conclusions - Fishermen in the processing area on board Norwegian trawlers are exposed to airborne bioaerosols as proteins, trypsin, fish allergen parvalbumin, and endotoxin. Levels varied between trawlers and type of production.

This is a pre-copyedited, author-produced version of an article accepted for publication in Annals of Work Exposures and Health following peer review. The version of record Heidelberg, Bang, Thomassen, Kamath, Ruethers, Lopata, Madsen, Sandsund, Aasmoe. Exposure to Bioaerosols during Fish Processing on Board Norwegian Fishing Trawlers. Annals of Work Exposures and Health. 2021;65(6):694-702, is available online at: https://doi.org/10.1093/annweh/wxaa104.