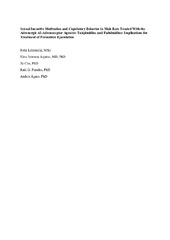 Background: Premature ejaculation is the most common sexual dysfunction in young men, and it often leads to reduced relationship satisfaction and quality of life.

Aim: To determine the role of central and peripheral α2-adrenoceptors in the control of ejaculation and sexual incentive motivation in rats.

Methods: Sexual incentive motivation was studied in a large arena in which a male subject could choose between approaching and remaining close to a sexually receptive female or another male. Sexual behavior was studied in standard observation cages in which a male was allowed to freely interact with a receptive female for 30 minutes. Two highly selective agonists at the α2-adrenoceptors, tasipimidine and fadolmidine, were administered before the tests. Low peripheral doses of fadolmidine have been reported to have effects mainly outside of the central nervous system, whereas at large doses also the central effects are evident.

Outcomes: The time spent close to the receptive female in relation to the time spent with the male and measures of ambulatory activity were obtained from the test for sexual incentive motivation, while the habitual parameters of sexual behavior were recorded with the copulation test.

Results: Tasipimidine prolonged ejaculation latency and the interintromission interval at the dose of 200 µg/kg when data from fast-ejaculating rats were used. No other sexual parameter was modified. A dose of 100 µg/kg was ineffective. There was no consistent effect on sexual incentive motivation, although modest sedation was observed. Fadolmidine, a drug that does not easily penetrate the blood–brain barrier, had no effect on sexual incentive motivation at any of the doses used (3, 30, and 100 µg/kg). The largest dose had clear sedative effects. The lower doses had no systematic effect on sexual behavior, not even when only fast or very fast ejaculating males were analyzed.

Clinical Translation: The findings are relevant to the search for treatments for premature ejaculation that are specific enough to selectively delay ejaculation.

Strengths & Limitations: The procedures used here are standard in the field and yield the most reliable data. Whether the effects observed in male rats are directly transferrable to men can only be determined through clinical studies.

Conclusion: The observation that drugs acting at central but not peripheral α2-adrenoceptors prolong ejaculation latency without affecting any other parameter of sexual behavior or sexual incentive motivation suggests that this kind of drug may be suitable for treating premature ejaculation.