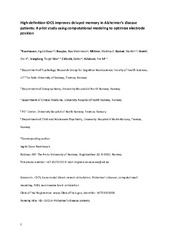 Background: The optimal stimulation parameters when using transcranial direct current stimulation (tDCS) to improve memory performance in patients with Alzheimer’s disease (AD) are lacking. In healthy individuals, inter-individual differences in brain anatomy significantly influence current distribution during tDCS, an effect that might be aggravated by variations in cortical atrophy in AD patients.

Objective: To measure the effect of individualized HD-tDCS in AD patients.

Conclusion: HD-tDCS significantly improved delayed memory in AD. Our study can be regarded as a proof-of-concept attempt to increase tDCS efficacy. The present findings should be confirmed in larger samples.