Nominativnye istochniki v kontekste vsemirnoy istorii perepisey: Rossiya i Zapad [Nominative Sources in the Context of the World History of Censuses: Russia and the West]. 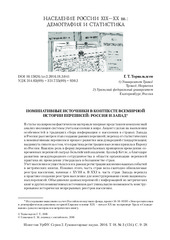 The article presents an original, comprehensive analysis of the evolution of the civil registration system in the world, based on wide empirical materials. The emphasis is on how information about the population in the Western countries and Russia has traditionally been collected. The development of the methods for taking the earliest censuses; the transition from numeric to nominative censuses and the development of international standardization; it is hypothesized that the practice of registration of the population came to Europe through Russia. Belgian academician Adolphe Quetelet played an important role in the formulation of the basic principles of modern census taking, and thanks to the development of international cooperation in the sphere of population enumeration, most countries established a more standardized methodology.

Population statistics were complemented with records of vital events in the church protocols from the 16th century. In addition, from the 18th century onwards, some countries conducted annually updated population registers. Combining census information from parish registers and other nominative sources of data provides a unique opportunity — to construct a historically continuous population register. In the late 20th century, some Western European countries started to combine their population registries with other electronic sources for the construction of national censuses.

Since the range of nominative sources in the West has been identified, digitized and largely introduced in scholarly work, while in Russia this process has just begun, it can be argued that the future of innovative historical demography lies in Russia.