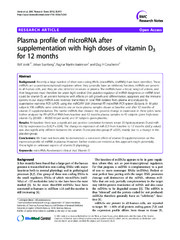 Background: Recently a large number of short non-coding-RNAs (microRNAs, (miRNA)) have been identified. These miRNAs act as post-transcriptional regulators where they generally have an inhibitory function. miRNAs are present in all human cells, and they are also detected in serum or plasma. The miRNAs have a broad range of actions, and their biogenesis must therefore be under tight control. One putative regulator of miRNA biogenesis or miRNA level could be vitamin D, an ancient hormone with effects on cell growth and differentiation, apoptosis and the immune system. In our study miRNA were reversed transcribed in total RNA isolated from plasma and analyzed by quantitative real-time PCR (qPCR) using the miRCURY LNA Universal RT microRNA PCR system (Exiqon). In 10 pilot subjects 136 miRNAs were detected in one or more plasma samples drawn at baseline and after 12 months of vitamin D supplementation. The twelve miRNAs that showed the greatest change in expression in these pilots were further analyzed by RT-qPCR of RNA from baseline and 12 months plasma samples in 40 subjects given high dose vitamin D3 (20.000 – 40.000 IU per week) and 37 subjects given placebo.

Conclusions: We have not been able to demonstrate a consistent effect of vitamin D supplementation on the expression profile of miRNA in plasma. However, further studies are needed as this approach might potentially throw light on unknown aspects of vitamin D physiology.