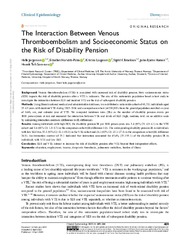 Methods: Using Danish national medical and administrative databases, we established a nationwide cohort of 41,781 individuals aged 25– 65 years with incident VTE during 1995– 2016 and a comparison cohort (n=208,905) from the general population matched on year of birth, sex, and calendar year of VTE. We computed incidence rates (IRs) as the number of disability pension events per 1000 person-years at risk and measured the interaction between VTE and levels of SES (high, medium, low) on an additive scale by calculating interaction contrasts (difference in IR difference).

Conclusion: SES and VTE interact to increase the risk of disability pension after VTE beyond their independent effects.