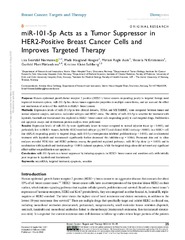 Methods: Expression levels of miR-101-5p in two clinical datasets, TCGA and METABRIC, were compared between tumor and normal adjacent samples, and across molecular subtypes and HER2 status. The ability of miR-101-5p to sensitize for treatment with lapatinib, tucatinib and trastuzumab was explored in HER2+ breast cancer cells responding poorly to such targeted drugs. Proliferation and apoptosis assays and downstream protein analysis were performed.

Results: Expression levels of miR-101-5p were significantly lower in tumor compared to normal adjacent tissue (p < 0.001), and particularly low in HER2+ tumors, both the HER2-enriched subtype (p ≤ 0.037) and clinical HER2-status (p < 0.001). In a HER2+ cell line (KPL4) responding poorly to targeted drugs, miR-101-5p overexpression inhibited proliferation (p < 0.001), and combinatorial treatment with lapatinib and trastuzumab significantly further decreased this inhibition (p = 0.004). Proteomic data and in silico analyses revealed PI3K/Akt- and HER2-pathways among the predicted regulated pathways. miR-101-5p alone (p = 0.018) and in combination with lapatinib and trastuzumab (p < 0.001) induced apoptosis, while the targeted drugs alone did not exert any significant effect neither on proliferation nor apoptosis.

Conclusion: miR-101-5p acts as a tumor suppressor by inducing apoptosis in HER2+ breast cancer and sensitizes cells with initially poor response to lapatinib and trastuzumab.