The effect of Riociguat on cardiovascular function and efficiency in healthy, juvenile pigs 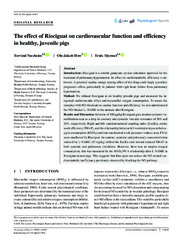 Introduction - Riociguat is a soluble guanylate cyclase stimulator approved for the treatment of pulmonary hypertension. Its effect on cardiometabolic efficiency is unknown. A potential cardiac energy sparing effect of this drug could imply a positive prognostic effect, particularly in patients with right heart failure from pulmonary hypertension.

Method - We infused Riociguat in six healthy juvenile pigs and measured the integrated cardiovascular effect and myocardial oxygen consumption. To assess the interplay with NO‐blockade on cardiac function and efficiency we also administered the NO‐blocker L‐ NAME to the animals after Riociguat.

Results and Discussion - Infusion of 100 µg/kg Riociguat gave modest systemic vasodilatation seen as a drop in coronary and systemic vascular resistance of 36% and 26%, respectively. Right and left ventriculoarterial coupling index (Ees/Ea), stroke work efficiency (SWeff), and the relationship between left ventricular myocardial oxygen consumption (MVO2) and total mechanical work (pressure–volume area; PVA) were unaffected by Riociguat. In contrast, systemic and pulmonary vasoconstriction induced by L‐NAME (15 mg/kg) shifted the Ees/Ea ratio toward reduced SWeff in both systemic and pulmonary circulation. However, there was no surplus oxygen consumption, that was measured by the MVO2/PVA relationship after L‐NAME in Riociguat‐treated pigs. This suggests that Riociguat can reduce the NO‐related cardiometabolic inefficiency previously observed by blocking the NO pathway.

Næsheim, How, Myrmel. The effect of Riociguat on cardiovascular function and efficiency in healthy, juvenile pigs. Physiological Reports. 2020;8(17)