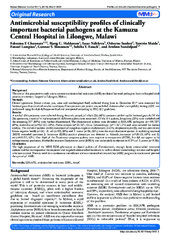 Background The aim of this prospective study was to ascertain antimicrobial resistance (AMR) in clinical bacterial pathogens from in-hospital adult patients at a tertiary hospital in Lilongwe, Malawi. Methods

Clinical specimens (blood culture, pus, urine and cerebrospinal fluid) collected during June to December 2017 were examined for bacterial growth in standard aerobic conditions. One specimen per patient was included. Antimicrobial susceptibility testing (AST) was performed using the disk diffusion method and interpreted according to EUCAST guidelines.

Conclusion The high proportion of the MDR ESBL-phenotype in clinical isolates of Enterobacterales, strongly limits antimicrobial treatment options and has consequences for empirical and targeted antimicrobial treatment as well as clinical microbiology services and hospital infection control. There is need for a continuous surveillance and an antimicrobial stewardship (AMS) program to contain and prevent the spread of AMR.

University of Malawi, College of Medicine