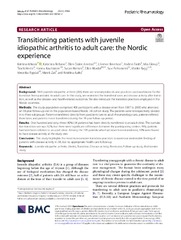 Background: With juvenile idiopathic arthritis (JIA), there are several protocols and practices used worldwide for the transition from paediatric to adult care. In this study, we examined the transferral rates and disease activity after transition, as well as the disease- and health-related outcomes. We also introduce the transition practices employed in the Nordic countries.

Methods: The study population comprised 408 participants with a disease onset from 1997 to 2000 who attended an 18-year follow-up visit in this population-based Nordic JIA cohort study. The patients were retrospectively divided into three subgroups: Patients transferred directly from paediatric care to adult rheumatology care, patients referred there later, and patients never transferred during the 18-year follow-up period.

Results: One hundred and sixty-three (40%) JIA patients had been directly transferred to an adult clinic. The cumulative transition rate was 52%, but there were significant differences between the participating centres. Fifty patients had later been referred to an adult clinic. Among the 195 patients who had never been transferred, 39% were found to have disease activity at the study visit.

Conclusion: This study highlights the need to reconsider transition practices to avoid our undesirable finding of patients with disease activity in JIA, but no appropriate health care follow-up