Feeling Unsafe at School Among Adolescents in 13 Asian and European Countries: Occurrence and Associated Factors 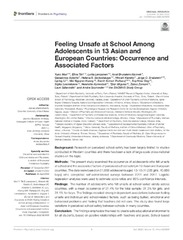 Background: Research on perceived school safety has been largely limited to studies conducted in Western countries and there has been a lack of large-scale cross-national studies on the topic.

Methods: The present study examined the occurrence of adolescents who felt unsafe at school and the associated factors of perceived school safety in 13 Asian and European countries. The data were based on 21,688 adolescents aged 13-15 (11,028 girls, 10,660 boys) who completed self-administered surveys between 2011 and 2017. Logistic regression analyses were used to estimate odds ratios and 95% confidence intervals.

Findings: The number of adolescents who felt unsafe at school varied widely across countries, with a mean occurrence of 31.4% for the total sample: 31.3% for girls, and 31.1% for boys. The findings revealed strong independent associations between feeling unsafe and individual and school-related factors, such as being bullied, emotional and behavioral problems and feeling that teachers did not care. The study also found large variations in perceived school safety between schools in many countries.

Conclusion: The findings emphasize the need to create safe educational environments for all students, based on positive relationships with teachers and peers. School-based interventions to prevent bullying and promote mental health should be a natural part of school safety promotion.