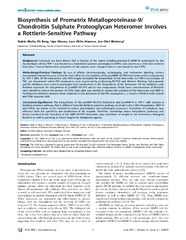 Background: Previously we have shown that a fraction of the matrix metalloproteinase-9 (MMP-9) synthesized by the macrophage cell line THP-1 was bound to a chondroitin sulphate proteoglycan (CSPG) core protein as a reduction sensitive heteromer. Several biochemical properties of the enzyme were changed when it was bound to the CSPG.
Methodology/Principal Findings: By use of affinity chromatography, zymography, and radioactive labelling, various macrophage stimulators were tested for their effect on the synthesis of the proMMP-9/CSPG heteromer and its components by THP-1 cells. Of the stimulators, only PMA largely increased the biosynthesis of the heteromer. As PMA is an activator of PKC, we determined which PKC isoenzymes were expressed by performing RT-PCR and Western Blotting. Subsequently specific inhibitors were used to investigate their involvement in the biosynthesis of the heteromer. Of the inhibitors, only Rottlerin repressed the biosynthesis of proMMP-9/CSPG and its two components. Much lower concentrations of Rottlerin were needed to reduce the amount of CSPG than what was needed to repress the synthesis of the heteromer and MMP-9. Furthermore, Rottlerin caused a minor reduction in the activation of the PKC isoenzymes d, e, h and u (PKD3) in both control and PMA exposed cells.
Conclusions/Significance: The biosynthesis of the proMMP-9/CSPG heteromer and proMMP-9 in THP-1 cells involves a Rottlerin-sensitive pathway that is different from the Rottlerin sensitive pathway involved in the CSPG biosynthesis. MMP-9 and CSPGs are known to be involved in various physiological and pathological processes. Formation of complexes may influence both the specificity and localization of the enzyme. Therefore, knowledge about biosynthetic pathways and factors involved in the formation of the MMP-9/CSPG heteromer may contribute to insight in the heteromers biological function as well as pointing to future targets for therapeutic agents.