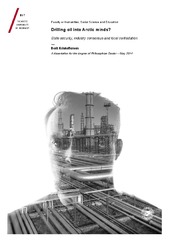 The thesis’ title Drilling Oil into Arctic Minds? points to the central role of geographical imaginaries in state and industry efforts to push oil production northward, and the extent to which local communities and civil society respond to these imaginaries. Critically examining how imaginaries describe and legitimize opportunities for future oil and gas extraction and expose scenarios of economic growth and activity, the thesis identifies the territorial, political and discursive strategies of the state, industry and society, looking at emergent (re)constitutions of economic- and geopolitical space in the Norwegian north. By employing analytical tools and insights from critical geopolitics and security studies, I unpack the processes and practices of the state in relation to other actors. The thesis is composed of four articles, which independently examine these dynamics. Through the articles I illustrate the power of the Norwegian state in how it frames a hierarchy of security concerns where climate change and environmental concerns are pitted against economic, territorial and energy security interests. This is reflected through new geopolitical imaginaries, relating to environmental concerns and energy security such as opportunistic adaptation in the Arctic. The combined contribution of the articles is to unpack state-industry relations that are characterized by consensus. I also show how the established state-industry geopolitical construct of the Norwegian Arctic as an economic space is challenged, if not destabilized, as the Norway’s northern seascapes might not be as promising as initially asserted. Focusing on the political dynamics taking shape in northern Norway, I show that Lofoten, Vesterålen and Senja have been targeted by a unified industry/state complex. The people and political stakeholders in Lofoten respond in ways that reflect their own regional challenges, highlighting concerns that extend beyond ‘the petroleum age’ in Norway. The thesis emphasizes the significance of local narratives and perceptions when it comes to how oil is understood to provide security. These perspectives from Lofoten are important when assessing the role of oil and gas development for the future and how local narratives can contribute to a post-petroleum discourse as well.