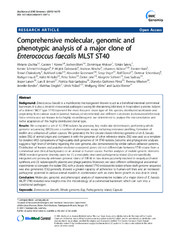 Background: Enterococcus faecalis is a multifaceted microorganism known to act as a beneficial intestinal commensal bacterium. It is also a dreaded nosocomial pathogen causing life-threatening infections in hospitalised patients. Isolates of a distinct MLST type ST40 represent the most frequent strain type of this species, distributed worldwide and originating from various sources (animal, human, environmental) and different conditions (colonisation/infection). Since enterococci are known to be highly recombinogenic we determined to analyse the microevolution and niche adaptation of this highly distributed clonal type.
Results: We compared a set of 42 ST40 isolates by assessing key molecular determinants, performing whole genome sequencing (WGS) and a number of phenotypic assays including resistance profiling, formation of biofilm and utilisation of carbon sources. We generated the first circular closed reference genome of an E. faecalis isolate D32 of animal origin and compared it with the genomes of other reference strains. D32 was used as a template for detailed WGS comparisons of high-quality draft genomes of 14 ST40 isolates. Genomic and phylogenetic analyses suggest a high level of similarity regarding the core genome, also demonstrated by similar carbon utilisation patterns. Distribution of known and putative virulence-associated genes did not differentiate between ST40 strains from a commensal and clinical background or an animal or human source. Further analyses of mobile genetic elements (MGE) revealed genomic diversity owed to: (1) a modularly structured pathogenicity island; (2) a site-specifically integrated and previously unknown genomic island of 138 kb in two strains putatively involved in exopolysaccharide synthesis; and (3) isolate-specific plasmid and phage patterns. Moreover, we used different cell-biological and animal experiments to compare the isolate D32 with a closely related ST40 endocarditis isolate whose draft genome sequence was also generated. D32 generally showed a greater capacity of adherence to human cell lines and an increased pathogenic potential in various animal models in combination with an even faster growth in vivo (not in vitro).
Conclusion: Molecular, genomic and phenotypic analysis of representative isolates of a major clone of E. faecalis MLST ST40 revealed new insights into the microbiology of a commensal bacterium which can turn into a conditional pathogen.