Can Auditory Brainstem Response be Used as a Diagnostic Tool for Patients Suffering from Schizophrenia, Attention Deficit Hyperactivity Disorder, and Bipolar Disorder? 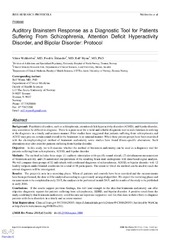 Background: Psychiatric disorders, such as schizophrenia, attention deficit hyperactivity disorder (ADHD), and bipolar disorder, may sometimes be difficult to diagnose. There is a great need for a valid and reliable diagnostic tool to aid clinicians in arriving at the diagnoses in a timely and accurate manner. Prior studies have suggested that patients suffering from schizophrenia and ADHD may process certain sound stimuli in the brainstem in an unusual manner. When these patient groups have been examined with the electrophysiological method of brainstem audiometry, some studies have found illness-specific aberrations. Such aberrations may also exist for patients suffering from bipolar disorder.

Objective: In this study, we will examine whether the method of brainstem audiometry can be used as a diagnostic tool for patients suffering from schizophrenia, ADHD, and bipolar disorder.

Methods: The method includes three steps: (1) auditory stimulation with specific sound stimuli, (2) simultaneous measurement of brainstem activity, and (3) automated interpretation of the resulting brain stem audiograms with data-based signal analysis. We will compare three groups of 12 individuals with confirmed diagnoses of schizophrenia, ADHD, or bipolar disorder with 12 healthy subjects under blinded conditions for a total of 48 participants. The extent to which the method can be used to reach the correct diagnosis will be investigated.

Results: The project is now in a recruiting phase. When all patients and controls have been recruited and the measurements have been performed, the data will be analyzed according to a previously arranged algorithm. We expect the recruiting phase and measurements to be completed in early 2015, the analyses to be performed in mid-2015, and the results of the study to be published in early 2016.

Conclusions: If the results support previous findings, this will lend strength to the idea that brainstem audiometry can offer objective diagnostic support for patients suffering from schizophrenia, ADHD, and bipolar disorder. A positive result from the study could imply that brainstem audiometry could become an important supportive tool for clinicians in their efforts to diagnose patients with these disorders in a timely and accurate manner.