Symptoms Reported by Head and Neck Cancer Patients during Radiotherapy and Association with Mucosal Ulceration Site and Size: An Observational Study. 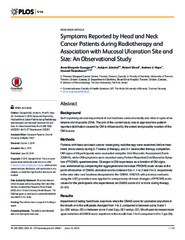 Background Self-reported pain and impairment of oral functions varies markedly and often in spite of extensive oral mucositis (OM). The aim of the current study was to appraise how patientreported debilitation caused by OM is influenced by the extent and possibly location of the OM lesions.

Methods Patients with head and neck cancer undergoing radiotherapy were examined before treatment, twice weekly during 6-7 weeks of therapy, and 3-4 weeks after therapy completion. OM signs of 33 participants were evaluated using the Oral Mucositis Assessment Scale (OMAS), while OM symptoms were recorded using Patient-Reported Oral Mucositis Symptom (PROMS)-questionnaires. Changes in OM experience as a function of OM signs was undertaken by comparing the aggregated and individual PROMS scale values at the point of transition of OMAS ulceration scores between 0 to 1, 1 to 2 and 2 to 3, respectively in the nine intra-oral locations designated in the OMAS. ANOVA with pairwise contrasts using the LSD procedure was applied for comparisons of mean changes of PROMS scale values for the participants who experienced an OMAS score of 2 or more during therapy (n=24).

Conclusion The relationship between patient-reported impairment of oral function and pain caused by OM ulceration is not linear, but rather curvilinear. Our findings should prompt investigators of future interventional trials to consider using a less severe outcome than maximum OM scores as the primary study outcome.