Symptoms, signs, and tests: The general practitioner's comprehensive approach towards a cancer diagnosis 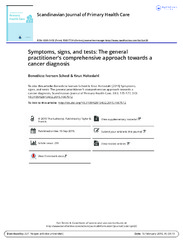 Objective. To study the relative importance of different tools a GP can use during the diagnostic process towards cancer detection.

Method. During 10 consecutive days, GPs registered all patient consultations and recorded any presence of seven focal symptoms and three general symptoms, commonly considered as warning signs of cancer (WSC). Follow-up was done six to 11 months later. For each patient with new or recurrent cancer, the GP completed a questionnaire with medical-record-based information concerning the diagnostic procedure.

Results. In 78% of cancer cases, symptoms, signs, or tests helped diagnose cancer. In 90 cases, there were 131 consultation-recorded WSC that seemed related to the cancer. Further symptoms were reported for another 74 cases. Different clinical signs were noted in 41 patients, 16 of whom had no previous recording of symptoms. Supplementary tests added information in 59 cases; in 25 of these there were no recordings of symptoms or signs. Sensitivity of any cancer-relevant symptom or clinical fi nding ranged from 100% for patients with uterine body cancer to 57% for patients with renal cancer.

Conclusion. WSC had a major role as initiator of a cancer diagnostic procedure. Low-risk-butnot-no-risk symptoms also played an important role, and in 7% of patients they were the only symptoms. Clinical fi ndings and/or supplementary procedures were sometimes decisive for rapid referral.