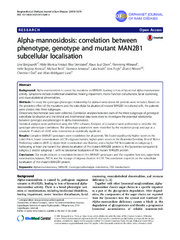 Methods: To study the genotype-phenotype relationship for alpha-mannosidosis 66 patients were included. Based on the predicted effect of the mutations and the subcellular localisation of mutant MAN2B1 in cultured cells, the patients were divided into three subgroups. Clinical and biochemical data were collected. Correlation analyses between each of the three subgroups of genotype/ subcellular localisation and the clinical and biochemical data were done to investigate the potential relationship between genotype and phenotype in alpha-mannosidosis. Statistical analyses were performed using the SPSS software. Analyses of covariance were performed to describe the genotype-phenotype correlations. The phenotype parameters were modelled by the mutation group and age as a covariate. P values of <0.05 were considered as statistically significant.

Results: Complete MAN2B1 genotypes were established for all patients. We found significantly higher scores in the Leiter-R test, lower concentrations of CSF-oligosaccharides, higher point scores in the Bruininks-Oseretsky Test of Motor Proficiency subtests (BOT-2); Upper limb coordination and Balance, and a higher FVC% in patients in subgroup 3, harbouring at least one variant that allows localisation of the mutant MAN2B1 protein to the lysosomes compared to subgrou 2 and/or subgroup 1 with no lysosomal localization of the mutant MAN2B1 protein.

Conclusion: Our results indicate a correlation between the MAN2B1 genotypes and the cognitive function, upper limb coordination, balance, FVC% and the storage of oligosaccharides in CSF. This correlation depends on the subcellular localisation of the mutant MAN2B1 protein.