Lost in Translation: a case-study of the travel of lean thinking in a hospital. 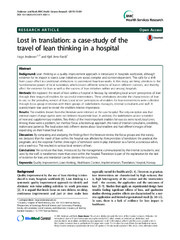 Background: Lean thinking as a quality improvement approach is introduced in hospitals worldwide, although evidence for its impact is scarce. Lean initiatives are social, complex and context-dependent. This calls for a shift from cause–effect to conditional attributions to understand how lean works. In this study, we bring attention to the transformative power of local translation, which creates different versions of lean in different contexts, and thereby affect the evidence for lean as well as the success of lean initiatives within and among hospitals.

Methods: We explored the travel of lean within a hospital in Norway by identifying local actors’ perceptions of lean through their images of enablers for successful interventions. These attributions describe the characteristics of lean in use, i.e. the prevailing version of lean. Local actors’ perceptions of enablers for lean interventions were collected through focus group interviews with three groups of stakeholders: managers, internal consultants and staff. A questionnaire was used to reveal the enablers relative importance.

Results: The enablers known from the literature were retrieved at the case hospital. The only exception was that external expert change agents were not believed to promote lean. In addition, the stakeholders added a number of new and supplementary enablers. Two-thirds of the most important enablers for success were novel, local ones. Among these were a problem, not method focus, a bottom-up approach, the need of internal consultants, credibility, realism and patience. The local actors told different stories about local enablers and had different images of lean depending on their hierarchical level.

Discussion: By comparing and analyzing the findings from the literature review, the focus groups and the survey, we deduced that the travel of lean within the hospital was affected by three principles of translation: the practical, the pragmatic, and the sceptical. Further, three logics of translation were in play: translation as a funnel, a conscious sell-in, and a wash-out. This resulted in various local versions of lean.

Conclusions: We conclude that lean, introduced by the management, communicated by the internal consultants, and used by the staff, is transformed more than once within the hospital. Translation is part of the explanation for the lack of evidence for lean, and translation can be decisive for outcomes.