Uric acid is associated with microalbuminuria and decreased glomerular filtration rate in the general population during 7 and 13 years of follow-up: The Tromsø Study 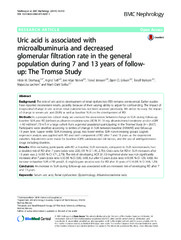 Background: The role of uric acid in development of renal dysfunction (RD) remains controversial. Earlier studies have reported inconsistent results, possibly because of their varying ability to adjust for confounding. The impact of longitudinal change in uric acid on renal outcome has not been assessed previously. We aimed to study the impact of change in serum uric acid (SUA) as well as baseline SUA on the development of RD.

Methods: In a prospective cohort study, we assessed the associations between change in SUA during follow-up, baseline SUA and RD (defined as albumin-creatinine-ratio (ACR) ≥1.13 mg albumin/mmol creatinine and/or eGFR < 60 ml/min/1.73 m2) in a large cohort from a general population participating in the Tromsø Study (n = 2637). Participants were stratified according to tertiles of change in SUA between baseline (1994/95) and follow-up 13 years later. (upper tertile: SUA increasing group, two lower tertiles: SUA non-increasing group). Logistic regression analysis was applied with RD and each component of RD after 7 and 13 years as the dependent variables. Adjustments were made for baseline eGFR, cardiovascular risk factors, and the use of antihypertensive drugs including diuretics.

Conclusion: An increase in SUA during follow-up was associated with an increased risk of developing RD after 7 and 13 years.