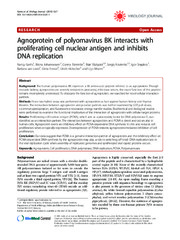 Background: The human polyomavirus BK expresses a 66 amino-acid peptide referred to as agnoprotein. Though mutants lacking agnoprotein are severely reduced in producing infectious virions, the exact function of this peptide remains incompletely understood. To elucidate the function of agnoprotein, we searched for novel cellular interaction partners.

Methods: Yeast-two hybrid assay was performed with agnoprotein as bait against human kidney and thymus libraries. The interaction between agnoprotein and putative partners was further examined by GST pull down, co-immunoprecipitation, and fluorescence resonance energy transfer studies. Biochemical and biological studies were performed to examine the functional implication of the interaction of agnoprotein with cellular target proteins.

Results: Proliferating cell nuclear antigen (PCNA), which acts as a processivity factor for DNA polymerase δ, was identified as an interaction partner. The interaction between agnoprotein and PCNA is direct and occurs also in human cells. Agnoprotein exerts an inhibitory effect on PCNA-dependent DNA synthesis in vitro and reduces cell proliferation when ectopically expressed. Overexpression of PCNA restores agnoprotein-mediated inhibition of cell proliferation.

Conclusion: Our data suggest that PCNA is a genuine interaction partner of agnoprotein and the inhibitory effect on PCNA-dependent DNA synthesis by the agnoprotein may play a role in switching off (viral) DNA replication late in the viral replication cycle when assembly of replicated genomes and synthesized viral capsid proteins occurs.