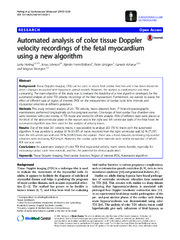 Background: Tissue Doppler imaging (TDI) can be used to assess fetal cardiac function and it has been shown to detect changes associated with hypoxia in animal models. However, the analysis is cumbersome and time consuming. The main objective of this study was to evaluate the feasibility of a new algorithm developed for the automated analysis of color TDI velocity recordings of the fetal myocardium. Furthermore, we wanted to assess the effect of different sizes of region of interests (ROI) on the measurement of cardiac cycle time intervals and myocardial velocities at different gestations.

Methods: This study included analysis of 261 TDI velocity traces obtained from 17 fetal echocardiographic examinations performed longitudinally on five pregnant women. Cine-loops of fetal cardiac four chamber view were recorded with color overlay in TDI mode and stored for off-line analysis. ROIs of different sizes were placed at the level of the atrioventricular plane in the septum and in the right and left ventricular walls of the fetal heart. An automated algorithm was then used for the analysis of velocity traces.

Results: Out of the total 261 velocity traces, it was possible to analyze 203 (78 %) traces with the automated algorithm. It was possible to analyze 93 % (81/87) of traces recorded from the right ventricular wall, 82 % (71/87) from the left ventricular wall and 59 % (51/87) from the septum. There was a trend towards decreasing myocardial velocities with increasing ROI length. However, the cardiac cycle time intervals were similar irrespective of which ROI size was used.