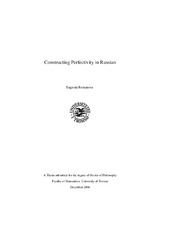 The thesis deals with one particular way of deriving perfective verbs in Russian, namely, prefixation. Prefixes are interesting not only because they turn imperfective verbs into perfectives, but also because they reveal dependencies between two different types of predicational structure, on the one hand, and the connection of event quantification with the event and argument shape, on the other.
The type of prefix simultaneously depends on the type of imperfective it attaches to and affects the syntactic distribution and the argument structure of its host verb. There are two types of prefix studied in the dissertation: lexical and superlexical. Lexical prefixes (LPs) merge in the extended prepositional structure as heads of PathP and attach to lexical verbs. Superlexical prefixes (SLPs) usually operate as quantifiers that apply at the level of VP. Lexical prefixes readily attach to transitive and unaccusative verbs, whereas unergative verbs serve as better hosts for superlexical prefixes. In fact, just a handful of LPs occur on unergative verbs and no PP complements can follow them. The reason for such a peculiar behavior of unergatives is mysterious, since nothing in the two predicational structures (VP and PP) would preclude them from combining with each other.
At the same time, it is not immediately clear what factor is crucial in selecting a type of prefixation: the argument structure or the aspectual characteristic of an imperfecticve verb. Motion verbs seem to provide the answer. Directed and non-directed motion verbs convey two clear imperfective readings, progressive and pluractional, respectively. In addition, when intransitive, directed motion verbs represent the unaccusative argument structure; non-directed motion verbs the unergative argument structure. Lexical prefixes attach to directed motion verbs and do not attach to non-directed motion verbs. Superlexical prefixes display reverse distribution. To find out what underlies such a neat split, the investigation of Path arguments of motion verbs has been undertaken. The conclusion reached as a result of this investigation is: non-directed motion verbs, in particular, and unergatives in general contain conflated material from the prepositional structure. As the conflated material is PathP, there is no room for the merge of lexical prefixes.
However, when it comes to superlexical prefixation, the aspectual characteristics of the verb come to the foreground. In this thesis just two superlexicals are considered: accumulative na- and distributive pere-. Both prefixes select for the particular event shape, so that the event can be measured: cumulative or pluractional. The arguments of the verb are used by the prefix-quantifier as a measure scale (with na-) or as a coverset defining the cardinality of the pluractional event (with pere-). The discussion of these two prefixes closes the dissertation, but a number of questions related to the interrelation between the verb, the prefix and the internal argument are still left open for further research.