Use of analgesics in the general population: Trends, persistence, high-risk use and associations with pain sensitivity 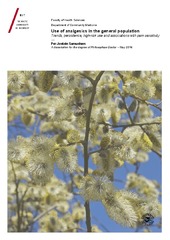 Background: Analgesics are commonly used drugs but we are lacking knowledge of trends, persistence, high-risk use and the association with pain sensitivity at a population-level. Purpose: To describe the use of analgesics, particularly persistent analgesic use, in a general population (30+ years), including change over time, contraindications and drug interactions, risk factors, and associations with pain sensitivity. Methods: The Tromsø Study, including Tromsø 5 (2001-02, n = 8,030) and Tromsø 6 (2007-08, n = 12, 981), with the latter further linked with the Norwegian Prescription Database (2004-13). Main results: The age-adjusted prevalence of analgesic use increased from 53.7% to 59.6% in women and from 29.1% to 36.7% in men between 2001 and 2008, due to an increase in the use of non-prescription analgesics. Several areas of potential high-risk use of analgesics were identified. The prevalence of persistent prescription analgesic use was 4.3% in general and 10.2% among those reporting chronic pain, while the incidence rate was 21.2 per 1,000 person-years; risk factors were chronic pain, increasing age, female sex, lower education level and most likely lower levels of physical activity. Analgesic use was associated with increased pain sensitivity; regular opioid users were more pain sensitive than regular users of non-opioid analgesics. Increased pain sensitivity was a risk factor for future persistent analgesic in the crude analysis. Conclusions: The use of analgesics increased from 2001 to 2008. The extent of use of non-steroidal anti-inflammatory drugs in the presence of chronic kidney disease, gastrointestinal ulcers, cardiovascular disease and interacting drugs increasing the bleeding risk was a particular cause for concern. The prevalence of persistent analgesic use was relatively low, also among those reporting chronic pain, perhaps indicative of limited effectiveness. Analgesic use is associated with increased pain sensitivity but the potential causal mechanisms are unclear.

Paper II and III of this thesis are not available in Munin
Paper II: Samuelsen, P. J., Svendsen, K., Wilsgaard, T., Stubhaug, A., Nielsen, C. S., Eggen, A.E.: “Persistent analgesic use and the association with chronic pain and other risk factors in the population - a longitudinal study from the Tromsø Study and the Norwegian Prescription Database”. Available in European Journal of Clinical Pharmacology 2016
Paper III: Samuelsen, P. J., Nielsen, C. S., Wilsgaard, T., Stubhaug, A., Svendsen, K., Eggen, A. E.: “Pain sensitivity as risk factor for analgesic use in 10,486 adults: The Tromsø Study”. (Manuscript)