Potato consumption and risk of colorectal and pancreatic cancer. The Norwegian Women and Cancer cohort and the HELGA cohort. 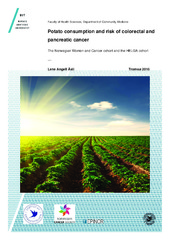