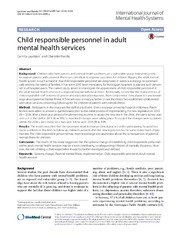 Background
Children who have parents with mental health problems are a vulnerable group. Intervening early to support parents with a mental illness can contribute to improve outcomes for children. Rigging the adult mental health system in such a manner that child responsible personnel are designated in wards is a strategy to systematically address the needs of families. It has since 2010 been mandatory for Norwegian hospitals to appoint such personnel in all hospital wards. The current study aimed to investigate the appointment of child responsible personnel in the adult mental health services in a regional hospital with local clinics. Additionally, to describe the characteristics of child responsible staff in terms of gender and educational background, their competence, clinical practice and knowledge about parental mental illness. A final aim was to study whether or not the clinics had established collaboration with other services concerning follow-up for the children of parents with mental illness.
Method
Participants in this study are the staff at psychiatric clinics in a large university hospital in Norway. Practitioners were asked to answer a questionnaire prior to the initial process of implementing the new legislation in 2010 (N = 219). After a three-year period of implementing routines to adopt the new law in the clinic, the same survey was sent out to the staff in 2013 (N = 185) to monitor if changes were taking place. To study if the changes were sustained within the clinics, we conducted a two-year follow up in 2015 (N = 108).
Results
The results indicated that the systematic work to change clinical practice in the participating hospital had made a difference. Routines to follow up children’s patients after the new legislation had to some extent been implemented. The child responsible personnel had more knowledge and awareness about the consequences of parental mental illness for children.
Conclusion
The results of this study suggested that the systems change of establishing child responsible personnel within adult mental health services may be a tool contributing to safeguarding children of mentally ill parents. However, the role of being a child responsible should be further developed and defined.