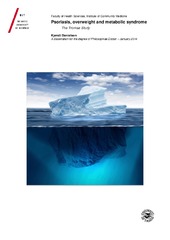 Recently it has been suggested that the chronic inflammatory disease psoriasis is more than skin deep, as it has been associated with several comorbid conditions, including diabetes and cardiovascular disease. Increasing prevalence of psoriasis has been observed, possibly due to changes in lifestyle. Within the population-based Tromsø study cohort, we found an increase in the self-reported prevalence of psoriasis over the past 30 years among adults above age 29; with more than doubled odds of psoriasis reported in 2007-08 as compared with 1979-80, independent of the investigated birth cohort and population ageing. The lifetime prevalence of psoriasis was 11% among adults in the 2007-08 survey. Overweight above a threshold of body mass index (BMI) 27-28 kg/m2 increased the psoriasis risk by 32-41% in 7-13 years follow-up in both genders combined, with even higher risk of 62-71% among overweight and obese non-smokers. Adult weight-gain led to up to 90% increased risk of psoriasis development from age 45. Smoking almost doubled the risk of psoriasis. The cumulative effect from smoking and obesity on psoriasis development may explain some of the increase in psoriasis observed in our study and in comparable populations. When investigating the association between psoriasis and the metabolic syndrome, 32% of psoriatics versus 24% of the reference population met the criteria for the metabolic syndrome. Men with psoriasis had a stable 35% increased odds of metabolic syndrome compared to persons without psoriasis, while young women with psoriasis displayed a four times increased odds of developing the metabolic syndrome. We observed a dose-response relationship between the severity of psoriasis and the odds of abdominal overweight in women. Further studies to evaluate the potential benefit from screening for the metabolic syndrome in patients with psoriasis are warranted.