Secular trends and correlates of physical activity: The Tromsø Study 1979-2008 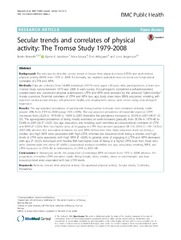 Background: The aim was to describe secular trends in leisure time physical activity (LTPA) and work related physical activity (WPA) from 1979 to 2008. Additionally, we explored potential cross-sectional and longitudinal correlates of LTPA and WPA.
Methods: Data are collected from 34,898 individuals (49.7% men) aged >20 years who participated in at least one Tromsø Study survey between 1979 and 2008. In each survey, the participants completed a self-administered questionnaire and underwent physical examinations. LTPA and WPA were assessed by the validated “Saltin-Grimby” 4-scale questions. Potential correlates of LTPA and WPA (sex, age, body mass index (BMI), education, smoking, selfreported cardiovascular disease, self-perceived health, and employment status) were tested using ordinal logistic regression.
Results: The age-adjusted prevalence of participants being inactive in leisure time remained relatively stable around 20% from 1979 to 2008 (range 19.9–23.6%). The age-adjusted prevalence of moderate-vigorous LTPA decreased from 23.2% in 1979–80 to 16.0% in 2001, thereafter the prevalence increased to 24.3% in 2007–08 (P <0. 05). The age-adjusted prevalence of being mostly sedentary at work increased gradually from 35.5% in 1979–80 to 53.4% in 2007–08 (P <0.05). Sex, age, education, and smoking were identified as cross-sectional correlates of LTPA and WPA (P <0.05). Men had higher odds of engaging in LTPA than women (adjusted OR 1.52 [95% CI 1.39–1.67] in 2007–08), whereas the association between sex and WPA shifted over time. High education level, not being a smoker, and high WPA were associated with high LTPA, whereas low education level, being a smoker, and high levels of LTPA were associated with high WPA (P <0.05). In general, odds of engaging in LTPA and WPA decreased with age (P <0.05). Individuals with healthy BMI had higher odds of being in a higher LTPA level than those who were underweight and obese (P <0.05). Longitudinal analyses identified sex, age, education, smoking, WPA, and LTPA measured in 1979–80 as determinants of LTPA in 2007–08.
Conclusions: In Norwegian adults, the proportion of sedentary WPA increased from 1979 to 2008, whereas the proportion of inactive LTPA remained stable. Being female, older, smoker, obese or underweight, and low education level were associated with low LTPA levels.