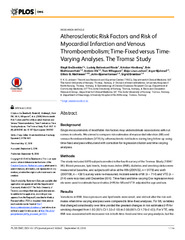 Background: Single measurements of modifiable risk factors may underestimate associations with outcomes in cohorts. We aimed to compare risk estimates of myocardial infarction (MI) and venous thromboembolism (VTE) by atherosclerotic risk factors during long follow-up using time-fixed analyses without and with correction for regression dilution and time-varying analyses.