Sex differences in fear of pain: item-level analysis of the Fear of Pain Questionnaire III 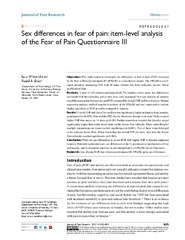 Objectives: This study aimed to investigate sex differences in fear of pain (FOP) measured by the Fear of Pain Questionnaire III (FPQ-III) in a nonclinical sample. The FPQ-III is a selfreport inventory measuring FOP, with 30 items, divided into three subscales: Severe, Minor and Medical Pain.

Methods: A total of 185 subjects participated (49.7% females) in this study. Sex differences on overall FOP, the subscales, and at item level were examined. One-way analysis of variance tested the association between sex and FOP, measured by overall FOP and the subscales. Ordinal regression analysis enabled item-level analysis of the FPQ-III and was conducted to explore further specificity of FOP in males compared to females.

Results: Overall FOP and fear of Severe Pain was significantly higher in females than in males, as measured by the FPQ-Total and the FPQ-Severe. Moreover, females were more likely to report higher FOP than males on 16 items (p<0.05). Further inspection revealed that females scored significantly higher than males on all items on the Severe Pain subscale. When controlling for multiple comparisons six items reached significance (p<0.001). Five of these items belonged to the subscale Severe Pain. When controlling for overall FOP one item, also from the Severe Pain subscale, reached significance (p<0.001).