Sensitivity of self-reported opioid use in case-control studies: Healthy individuals versus hospitalized patients 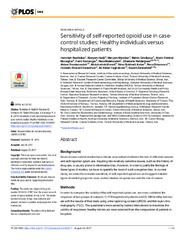