Changes in the human transcriptome upon vitamin D supplementation 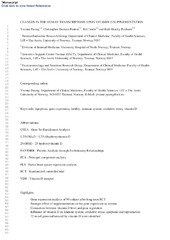 Vitamin D is hydroxylated in the liver and kidneys to its active form, which can bind to the vitamin D receptor (VDR). The VDR is present in a wide variety of different cells types and tissues and acts as a transcription factor. Although activation of the VDR is estimated to regulate expression of up to 5% of the human genome, our study is the first analysing gene expression after supplementation in more than 10 subjects.

Subjects of a randomized controlled trial (RCT) received either vitamin D3 (n = 47) in a weekly dose of 20,000 IU or placebo (n = 47) for a period of three to five years. For this study, blood samples for preparation of RNA were drawn from the subjects and mRNA gene expression in blood was determined using microarray analysis.

The two study groups were similar regarding gender, age, BMI and duration of supplementation, whereas the mean serum 25-hydroxyvitamin D (25(OH)D) level as expected was significantly higher in the vitamin D group (119 versus 63 nmol/L). When analysing all subjects, nearly no significant differences in gene expression between the two groups were found. However, when analysing men and women separately, significant effects on gene expression were observed for women. Furthermore, when only including subjects with the highest and lowest serum 25(OH)D levels, additional vitamin D regulated genes were disclosed. Thus, a total of 99 genes (p ≤ 0.05, log2 fold change ≥|0.2|) were found to be regulated, of which 72 have not been published before as influenced by vitamin D. These genes were particularly involved in the interleukin signaling pathway, oxidative stress response, apoptosis signaling pathway and gonadotropin releasing hormone receptor pathway. Thus, our results open the possibility for many future studies.