Blood pressure target achievement and antihypertensive medication use in women and men after first-ever myocardial infarction: the Tromsø Study 1994-2016 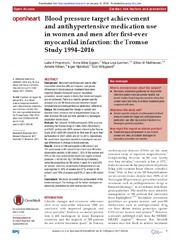 Background:
Recurrent cardiovascular events after myocardial infarction (MI) are frequent, and gender differences in blood pressure treatment have been reported. Despite increased focus on secondary prevention, recent reports indicate that treatment targets are not achieved. There is a need for gender-specific analyses of post-MI blood pressure treatment target achievement and antihypertensive medication adherence.
Design:
We investigated the change in systolic and diastolic blood pressure and antihypertensive drug use after first-ever MI over two time periods in a Norwegian population-based study.
Methods:
We followed 10 089 participants (55% women) attending the Tromsø Study in 1994–1995 (MI-cohort I) and 8412 participants (55% women) attending the Tromsø Study 2007–2008 (MI-cohort II) for first-ever MI up to their participation in 2007–2008 and 2015–2016, respectively. We used linear regression models to investigate sex and age differences in change in blood pressure.
Results:
A total of 396 participants in MI-cohort I and 131 participants in MI-cohort II had a first-ever MI in the observation periods. In MI-cohort I, 35% of the women and 52% of the men achieved the treatment targets of blood pressure <140/90 mm Hg (130/80 mm Hg if diabetic), while the proportions for MI-cohort II were 50% and 54% for women and men, respectively. Antihypertensive use was reported in 88% of women and 87% of men in MI- cohort I, and 76% of women and 81% of men in MI-cohort II.
Conclusions:
We found an overall low achievement of the treatment target. The findings call for better strategies for secondary prevention for both women and men.