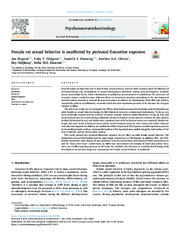 Serotonin plays an important role in adult female sexual behavior, however little is known about the influence of serotonin during early development on sexual functioning in adulthood. During early development, serotonin acts as neurotrophic factor, while it functions as a modulatory neurotransmitter in adulthood. The occurrence of serotonin release, could thus have different effects on behavioral outcomes, depending on the developmental period in which serotonin is released. Because serotonin is involved in the development of the HPG axis which is required for puberty establishment, serotonin could also alter expression patterns of for instance the estrogen receptor ɑ (ERɑ).

The aim of our study was to investigate the effects of increased serotonin levels during early development on adult female rat sexual behavior during the full behavioral estrus in a seminatural environment. To do so, rats were perinatally exposed with the selective serotonin reuptake inhibitor (SSRI) fluoxetine (10 mg/kg FLX) and sexual performance was tested during adulthood. All facets of female sexual behavior between the first and last lordosis (behavioral estrus), and within each copulation bout of the behavioral estrus were analyzed. Besides the length and onset of the behavioral estrus and the sexual behaviors patterns, other social and conflict behavior were also investigated. In addition, we studied the effects of perinatal FLX exposure on ERɑ expression patterns in the medial preoptic nucleus, ventromedial nucleus of the hypothalamus, medial amygdala, bed nucleus of the stria terminalis, and the dorsal raphé nucleus.

The results showed that perinatal fluoxetine exposure has no effect on adult female sexual behavior. The behavioral estrus of FLX-females had the same length and pattern as CTR-females. In addition, FLX- and CTR-females showed the same amount of paracopulatory behavior and lordosis, both during the full behavioral estrus and the “most active bout”. Furthermore, no differences were found in the display of social and conflict behaviors, nor in ERɑ expression patterns in the brain. We conclude that increases in serotonin levels during early development do not have long-term consequences for female sexual behavior in adulthood.