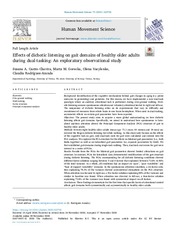 Background - Identification of the cognitive mechanisms behind gait changes in aging is a prime endeavor in gerontology and geriatrics. For this reason, we have implemented a new dual-task paradigm where an auditory attentional task is performed during over-ground walking. Dichotic listening assesses spontaneous attention and voluntary attention directed to right and left-ear. The uniqueness of dichotic listening relies on its requirements that vary in difficulty and recruitment of resources from whole brain to one brain hemisphere. When used in dual-tasking, asymmetric effects on certain gait parameters have been reported.

Methods - Seventy-eight healthy older adults (mean age: 71.1 years; 44 women and 34 men) underwent the Bergen dichotic listening test while walking. As this study only focuses on the effects of the cognitive task on gait, only dual-task costs for gait were calculated and entered into the PCA analyses. We explored the PCA structure for the effects on bilateral gait parameters (i.e., both limbs together) as well as on lateralized gait parameters (i.e, separate parameters by limb). We first established gait domains during single-task walking. Then, dual-task cost scores for gait were entered in a series of PCAs.

Results - Results from the PCAs for bilateral gait parameters showed limited alterations on gait structure. In contrast, PCAs for lateralized data demonstrated modifications of the gait structure during dichotic listening. The PCAs corresponding for all dichotic listening conditions showed different factor solutions ranging between 4 and 6 factors that explained between 73.8% to 80% of the total variance. As a whole, all conditions had an impact on “pace”, “pace variability” and “base of support variability” domains. In the spontaneous attention condition, a six-factor solution explaining 78.3% of the variance showed asymmetrical disruptions on the PCA structure. When attention was focused to right-ear, a five-factor solution explaining 89% of the variance and similar to baseline was found. When attention was directed to left-ear, a four-factor solution explaining 73.8% of the variance was found with symmetrical impact on all factors.

Conclusions - These findings demonstrate for the first time that specific facets of attentional control affects gait domains both symmetrically and asymmetrically in healthy older adults.