Risk of cervical intraepithelial neoplasia grade 3 or higher (CIN3+) among women with HPV-test in 1990–1992, a 30-year follow-up study 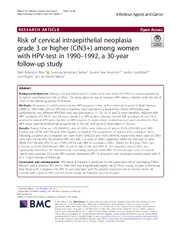 Background/objective - Having a 30-year follow-up of a cohort of women tested for HPV is a unique opportunity to further study long-term risk of CIN3+. The study objective was to compare HPV status at baseline with the risk of CIN3+ in the follow-up period of 30 years.

Methods - All women (n = 642) referred to the HPV outpatient clinic at the University Hospital of North Norway (UNN) in 1990–1992, with an HPV test at baseline, were included in a prospective cohort. HPV-testing was performed by two different HPV-DNA tests, and genotypes 6, 11, 16, 18, 31 and 33 were identified. High-risk (HR) HPV genotypes (16, 18, 31 and 33) were classified as HPV positive, whereas low-risk (LR) genotypes (6 and 11) in addition to absent HPV were classified as HPV negative. A single cohort in which women were classified for their HPV status underwent follow-up prospectively to the last time-point of observation of 30 years.

Conclusion and consequences - HPV status at baseline is predictive for the subsequent risk of developing CIN3+. Women with a positive HPV test in 1990–1992 had a significantly higher risk of CIN3+ during 30 years of follow-up than those with a negative test. HPV 16 was associated with the greatest long-term risk of cervical cancer. All patients with a positive HPV test at baseline should be followed up until negative.