A combined effect of anti-HPA-1a and anti-HLA Class I in pregnancy? 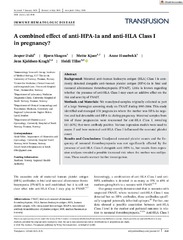 Background - Maternal anti–human leukocyte antigen (HLA) Class I is commonly detected alongside anti–human platelet antigen (HPA)-1a in fetal and neonatal alloimmune thrombocytopenia (FNAIT). Little is known regarding whether the presence of anti-HLA Class I may exert an additive effect on the risk and severity of FNAIT.

Methods and Materials - We reanalyzed samples originally collected as part of a large Norwegian screening study on FNAIT during 1995-2004. This study identified and managed 170 pregnancies where the mother was HPA-1a negative and had detectable anti-HPA-1a during pregnancy. Maternal samples from 166 of these pregnancies were rescreened for anti-HLA Class I, revealing 111 (67%) that were antibody positive. Various regression models were used to assess if and how maternal anti-HLA Class I influenced the neonatal platelet count.

Results and Conclusions - Unadjusted neonatal platelet counts and the frequency of neonatal thrombocytopenia was not significantly affected by the presence of anti-HLA Class I alongside anti–HPA-1a, but results from regression analyses revealed a possible increased risk when the mother was nulliparous. These results warrant further investigation.