Kidney biopsy diagnosis in childhood in the Norwegian Kidney Biopsy Registry and the long-term risk of kidney replacement therapy: a 25-year follow-up 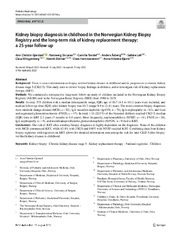 Background There is scarce information on biopsy-verifed kidney disease in childhood and its progression to chronic kidney disease stage 5 (CKD 5). This study aims to review biopsy fndings in children, and to investigate risk of kidney replacement therapy (KRT).

Conclusions The risk of KRT after a kidney biopsy diagnosis is highly dependent on the diagnosis. None of the children with MCD commenced KRT, while 63.8% with FSGS and 100% with NPHP reached KRT. Combining data from kidney biopsy registries with registries on KRT allows for detailed information concerning the risk for later CKD 5 after biopsyverifed kidney disease in childhood.