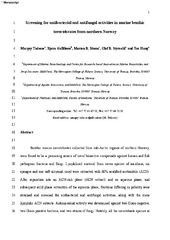 Benthic marine invertebrates collected from sub-Arctic regions of northern Norway, were found to be a promising source of novel bioactive compounds against human and fish pathogenic bacteria and fungi. Lyophilized material from seven species of ascidians, six sponges and one soft alcyonid coral were extracted with 60% acidified acetonitrile (ACN). After separation into an ACN-rich phase (ACN extract) and an aqueous phase, and subsequent solid phase extraction of the aqueous phase, fractions differing in polarity were obtained and screened for antibacterial and antifungal activities, along with the more lipophilic ACN-extracts. Antimicrobial activity was determined against two Gram-negative, two Gram-positive bacteria, and two strains of fungi. Notably, all the invertebrate species in the study showed activity against all four strains of bacteria and the two strains of fungi. In general, the aqueous fractions displayed highest antimicrobial activity, and the most potent extracts were obtained from the colonial ascidian Synoicum pulmonaria which displayed activity against bacteria and fungi at a concentration of 0.02 mg/ml; the lowest concentration tested.