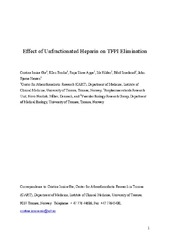 Background: Tissue factor pathway inhibitor (TFPI) plays an important role for the anticoagulant effect of heparin. Depletion of intravascular TFPI by treatment with unfractionated heparin (UFH), and not by low molecular weight heparin (LMWH), has been suggested to explain the superiority of LMWH in treatment of both arterial and venous thrombosis. The present study was undertaken to investigate the impact of UFH on clearance kinetics, and organs and cells responsible for the clearance of recombinant human full length TFPI purified from baby hamster kidney cells (TFPIBHK) and from E.Coli (TFPIE.Coli).
Methods: Male Sprague-Dawley rats were used as research animals. TFPIBHK and TFPIE.Coli were labelled with 125I, and used to study clearance in vivo.
Results: Surface Plasmon Resonance (SPR) analysis revealed that both types of TFPI bound to UFH in vitro, but TFPIE.Coli exhibited a faster association rate and a much slow dissociation rate. Intravenous administration of 100 IU/kg UFH immediately prior to TFPI decreased the circulatory survival (t1/2α) of TFPIBHK from 1.99 ± 0.10 min to 1.17 ± 0.13 min (p<0.001) without affecting the fast clearance of TFPIE.Coli. Presence of UFH significantly increased the circulatory survival during the slow t1/2β phase of TFPIE.Coli from 27.44 ± 1.91 min to 36.88 ± 1.87 min (p<0.05) without affecting the t1/2β of TFPIBHK. Hepatocellular distribution of radiolabeled ligands showed that both forms of TFPI were mainly taken up by PCs in the absence of UFH (≥ 90%). UFH administration switched the hepatocellular distribution of TFPIE.Coli from PCs towards LSECs, without affecting the distribution of TFPIBHK.
Conclusions: Our findings revealed a specific increase in the elimination of TFPIBHK during UFH treatment. This observation may represent the underlying mechanism for depletion of endogenous TFPI in humans during UFH treatment.

This paper is part of Cristina Ionica Øie's doctoral thesis, which is available in Munin at http://hdl.handle.net/10037/2910