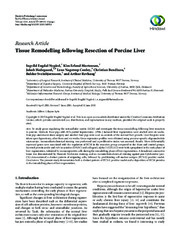 Results. More differentially expressed genes were associated with the regulation of ECM in the resection group compared to the sham and control groups. Secreted protein acidic and rich in cysteine (SPARC) and collagen 1, alpha 2 (COL1A2) were both upregulated in the early phase of liver regeneration, validated by immunopositive cells during the remodelling phase of liver regeneration. A broadened connective tissue was demonstrated by Masson’s Trichrome staining, and an immunohistochemical staining against pan-Cytokeratin (panCK) demonstrated a distinct pattern of migrating cells, followed by proliferating cell nuclear antigen (PCNA) positive nuclei.

Conclusions. The present study demonstrates both a distinct pattern of PCNA positive nuclei and a deposition of ECM proteins in the remodelling phase of liver regeneration.