Early intervention influences positively quality of life as reported by prematurely born children at age nine and their parents; a randomized clinical trial 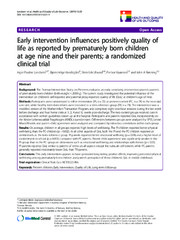 Background: The Tromsø Intervention Study on Preterms evaluates an early, sensitizing intervention given to parents of prematurely born children (birth-weight < 2000 g). The current study investigated the potential influence of the intervention on children’s self-reported and parental proxy-reported quality of life (QoL) at children’s age of nine.

Methods: Participants were randomized to either intervention (PI, n = 72) or preterm control (PC, n = 74) in the neonatal care unit, while healthy term-born infants were recruited to a term reference group (TR, n = 75). The intervention was a modified version of the Mother-Infant Transaction Program, and comprised eight one-hour sessions during the last week before discharge and four home visits at 1, 2, 4 and 12 weeks post-discharge. The two control groups received care in accordance with written guidelines drawn up at the hospital. Participants and parents reported QoL independently on the Kinder Lebensqualität Fragebogen (KINDL) questionnaire. Differences between groups were analyzed by SPSS; Linear Mixed Models and parent–child agreement were analyzed and compared by intra-class correlations within each group.

Results: On average, children in all groups reported high levels of well-being. The PI children reported better physical well-being than the PC children (p = 0.002). In all other aspects of QoL both the PI and the PC children reported at similar levels as the term reference group. PI parents reported better emotional wellbeing (p = 0.05) and a higher level of contentment in school (p = 0.003) compared with PC parents. Parent–child agreement was significantly weaker in the PI group than in the PC group on dimensions such as emotional well-being and relationships with friends (p < 0.05). PI parents reported QoL similar to parents of terms on all aspects except the subscale self-esteem, while PC parents generally reported moderately lower QoL than TR parents.